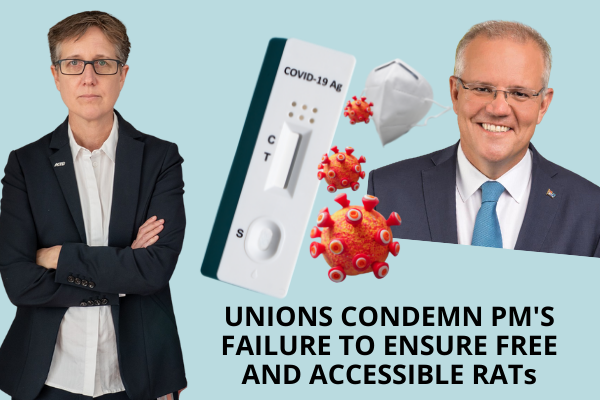 Instead, the federal government announced they are allowing more workers who are close contacts to attend work: this is not a solution to the current crisis.

It increases risk and could increase sickness in workplaces and across the community at a time when health workers and hospitals are already overwhelmed.

ACTU Secretary Sally McManus said that the ACTU understands that Australians are facing an increasing health and economic emergency.

“The federal government’s plan to open up, if there is one, has clearly failed our health systems, our economy and the essential national supply chains,” Ms McManus said.

“[Yesterday] we have again seen the Prime Minister fail to outline a plan for free and accessible Rapid Antigen Tests as the key measure workers and the community need to keep themselves safe and to limit the spread of Omicron.

“This is a major concern for all workers.

“Essential workers are being forced to put themselves in harm’s way to keep food on the shelves, medicines in stock, the lights and water on and keep this country open for business.

“If the federal government had listened to the calls of health experts, unions and businesses last year we would have had sufficient supply of RATs, and nobody would go to work when they have been in close contact with the Covid virus.

“They would stay home to keep themselves and others safe,” she said.

ACTU willing to work with government

It is now four days since the ACTU wrote to the Prime Minister offering to work together during this crisis with a proposal of four key urgent changes working people need.

There has been no response, at the time of writing.

The ACTU has called an emergency meeting of all union leaders for Monday (17 January) to consider a response to the federal government failing to address the urgent needs of workers at this time of crisis.

Ms McManus said Australia is in this position because the federal government did not do their job and secure adequate supply of free RATs.

“Forcing more workers who are close contact to go to work increases risk and will not limit the spread that is putting health workers and our hospitals under intolerable pressure,” she said.

“If the Prime Minister will not act, and if our national government will not provide national leadership during this time of national crisis, then workers and their unions will.

“Accordingly, the ACTU has called a crisis meeting of union leaders representing all workers to consider our response to the Prime Minister’s regrettable failure of leadership, to ensure that Australian can get through the continuing pandemic without compromising the safety of workers and the Australian community,” Ms McManus said.

IEU-QNT Branch Secretary Terry Burke said the IEU will be participating in the national crisis meeting.

“Our union, and the broader union Australian union community, has been working tirelessly throughout the pandemic to ensure that workplaces remain as safe as possible,” Mr Burke said.

“We continue to be with our members every step of the way and we are outraged that while workers have gone above and beyond to keep the community safe over the past two years, the federal government continues to shirk their responsibilities.

“It goes to show that our union collective is essential in supporting workers and fighting for working rights, not only in our sector, but everywhere. We make a difference, and we will continue to advocate for health and safety and common sense,” Mr Burke said.

Take action today by signing your name to the ACTU petition calling on the federal government to provide free and accessible RATs to all.